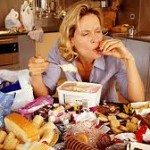 Compulsive overeating, also sometimes called food addiction, is characterized by an compulsive/obsessive relationship to food. Professionals address this with either a behavior-modification model or a food-addiction model. An individual suffering from compulsive overeating disorder engages in frequent episodes of uncontrolled eating or binge eating, during which they may feel frenzied or out of control, often consuming food past the point of being comfortably full. Bingeing in this way is generally followed by feelings of guilt and depression. Unlike individuals with bulimia, compulsive overeaters do not attempt to compensate for their bingeing with purging behaviors such as fasting, laxative use or vomiting. Compulsive overeaters will typically eat when they are not hungry. Their obsession is demonstrated in that they spend excessive amounts of time and thought devoted to food, and secretly plan or fantasize about eating alone. Compulsive overeating usually leads to weight gain and obesity, but not everyone who is obese is also a compulsive overeater. While compulsive overeaters tend to be overweight or obese, persons of normal or average weight can also be affected.
In addition to binge eating, compulsive overeaters can also engage in grazing behavior, during which they return to pick at food throughout the day. These things result in a large overall number of calories consumed even if the quantities eaten at any one time may be small. When a compulsive eater overeats primarily through bingeing, he or she can be said to have a binge eating disorder.
Left untreated, compulsive overeating can lead to serious medical conditions including high cholesterol, diabetes, heart disease, hypertension, sleep apnea, and major depression. Additional long-term side effects of the condition also include kidney disease, arthritis, bone deterioration and stroke. Other negative effects may include the amount of money that is wasted on food and the feelings of low self-esteem that comes as a result of bingeing.
During binges, compulsive overeaters may consume from 5000 to 15,000 food calories daily, resulting in a temporary release from psychological stress through an addictive high not unlike that experienced through drug abuse. In bulimics, this high may be intensified by the act of purging. Researchers have speculated there is an abnormality of endorphin metabolism in the brain of binge eaters that triggers the addictive process. This is in line with other theories of addiction that attribute it not to avoidance of withdrawal symptoms, but to a primary problem in the reward centers of the brain. For the Compulsive Overeater, the ingestion of trigger foods causes release of the neurotransmitter, serotonin. This could be another sign of neurobiological factors contributing to the addictive process. Abstinence from addictive food and food eating processes causes withdrawal symptoms in those with eating disorders. There may be higher levels of depression and anxiety due to the decreased levels of serotonin in the individual.
Food is a complex mixture of chemicals that can affect the body in multiple ways, which is magnified by stomach-brain communication. In some ways, it may be much more difficult for compulsive overeaters to recover than drug addicts. There is an anecdotal saying that “when you are addicted to drugs you put the tiger in the cage to recover; when you are addicted to food you put the tiger in the cage, but take it out three times a day for a walk.”
The physical explanation of compulsive overeating may be attributed to an overeaters’ increased tendency to secrete insulin at the sight and smell of food, though medical evidence supporting this is controversial.
Fatty foods may cause cocaine-like addiction. Taking drugs such as cocaine and eating too much junk food both gradually overload the so-called pleasure centers in the brain, according to Paul J. Kenny, Ph.D., an associate professor of molecular therapeutics at the Scripps Research Institute, in Jupiter, Florida. Eventually the pleasure centers “crash,” and achieving the same pleasure—or even just feeling normal—requires increasing amounts of the drug or food, says Kenny, the lead author of the study.
Compulsive overeating is treatable with counseling, coaching and therapy. Approximately 80% of sufferers who seek professional help recover completely or experience significant reduction in their symptoms. According to Dr. Gregg Jantz of The Center for Counseling and Health Resources in Edmonds, WA; less than 2% of morbidly obese clients ever recover]. Many eating disorders are thought to be behavioral patterns stemming from emotional struggles that need to be resolved in order for the sufferer to develop lasting results and a healthy relationship with food. Compulsive overeating (along with anorexia) is a serious problem and can result in death. However, with treatment it can be overcome.